Looking at Flint… Who, How, and Why 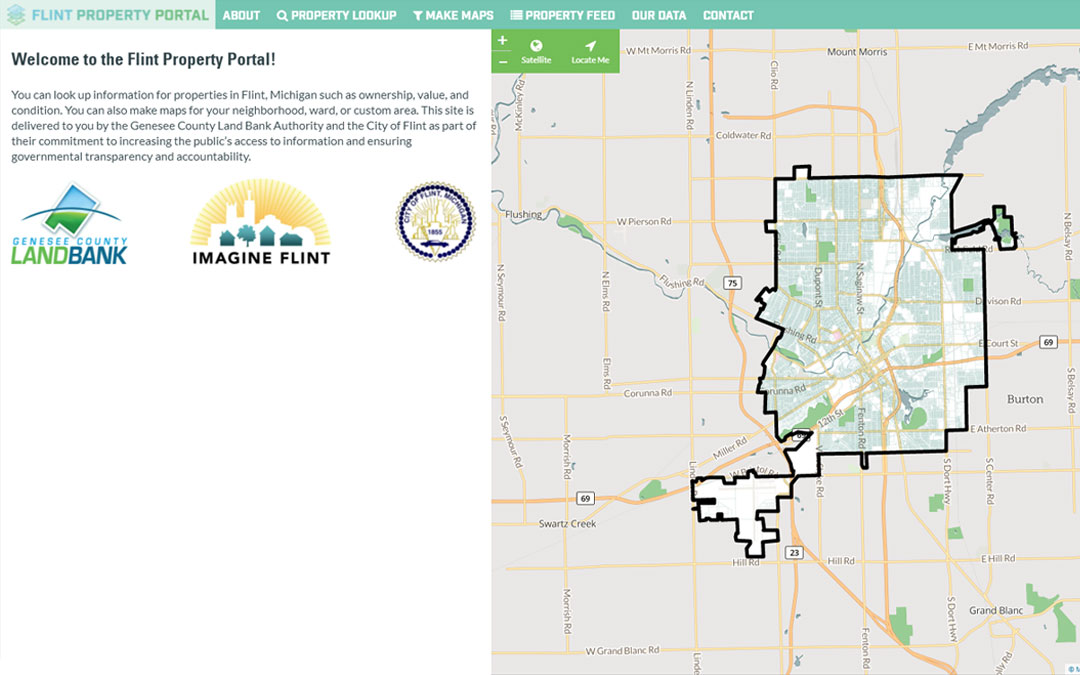 Have you seen a car driving slowly down your street and stopping in front of every house and every vacant lot taking a photo with a large flat tablet? What’s that all about?

Every two years each parcel in Flint is photographed and its condition evaluated. Soon you will be able to go to the Flint Property Portal on your computer or smartphone (there’s an App for that!) to learn who owns the vacant lot or house down the street, its size, whether it’s occupied or vacant, zoning, state equalized value, and condition. It has become a part of a huge database of the conditions of Flint in this fall of 2021 that can be used for planning and seeking funds for the work of Flint and its many kinds of property.

The Genesee County Land Bank and the City of Flint partnered to create the Flint Property Portal (www.flintpropertyportal.com) and conducted the first neighborhood survey in 2017 to make public data available to strengthen engagement, transparency, and trust between residents and local government in Flint.  The portal is used to collect and display data collected by residents through the Your Neighborhood Inventory.

Bi-annually, the City and the Community Foundation of Greater Flint engage residents in collecting property condition information in Flint. The Land Bank uses the data collected to find which properties should be placed on a demolition list and which properties should be marketed and sold for re-use. The City of Flint uses it in planning both within the community and in economic development and has contracted with 45 neighborhood groups to do this work.

The Flint Property Portal is recognized nationally as a model for increasing resident engagement and public transparency in local government. For more information on the Your Neighborhood Inventory contact Keizzy Anpalagan (kanpalagan@cityofflint.com) at the City of Flint or Lynn Williams (lwilliams@cfgf.org) at the Community Foundation of Greater Flint.

Who are the drivers and photographers? Community groups can apply to take on this photo and evaluation responsibility. For example: King Avenue PLUS applied for and received an assignment of 3007 parcels in a specific area to photograph and evaluate over about 8 weeks’ time. Not a quick task as the City of Flint has 55,309 separate parcels. KAP will earn $500 when they have completed the work. (Money spent on plants or meeting supplies or projects within the community.)

The opportunity to obtain the dollars starts the willingness of most groups, but the discoveries and ideas are far more powerful.

The City of Flint trains the teams in their use of the tablet to record each building and vacant lot.  They teach  how to  locate  the parcels, photograph each one, and describe the condition in a consistent way.  Partners plan a time and take on several streets.  They open the tablet’s map  and slowly drive until the locator “dot” on the map and their ability to see and photograph a lot or house lines up. (You may have seen folks moving back and forth a few feet especially where there are three or more vacant lots all together. The “dot” tells when we will obtain the information for the correct parcel.)  Just a few answers to questions are completed as to the condition of the property, then taking a good photo (being careful not to have any people or license plates visible in the photo).

The first thing noted was that our familiar north side neighborhood was overwhelmingly a cared for community. Houses, flowers, vacant lots obviously tended by the neighbor next door. (Clue: Same lawnmower patterns! I didn’t ever notice that before and then I admired the neighbor that I did not yet know or don’t know that I know because I know them in a meeting not in their home!)

Streets we travel all the time have many attributes and worries that we had paid little problem-solving attention to incredibly tidy and well-cared for homes where the roof is in bad shape, or the porch steps and railing are twisting, or the front sidewalk is buckled. Identifying specific kinds of resources that our neighbors and neighborhood need may be another important result as well as immediately providing the information about today’s sources for roof repair to the person who may choose to use it.

For King Avenue PLUS and for many of the other organizations doing this work, this information will be a tool for planning and advocating for and with our community and for conversations that change the agenda for those in the meeting and in our neighborhood.