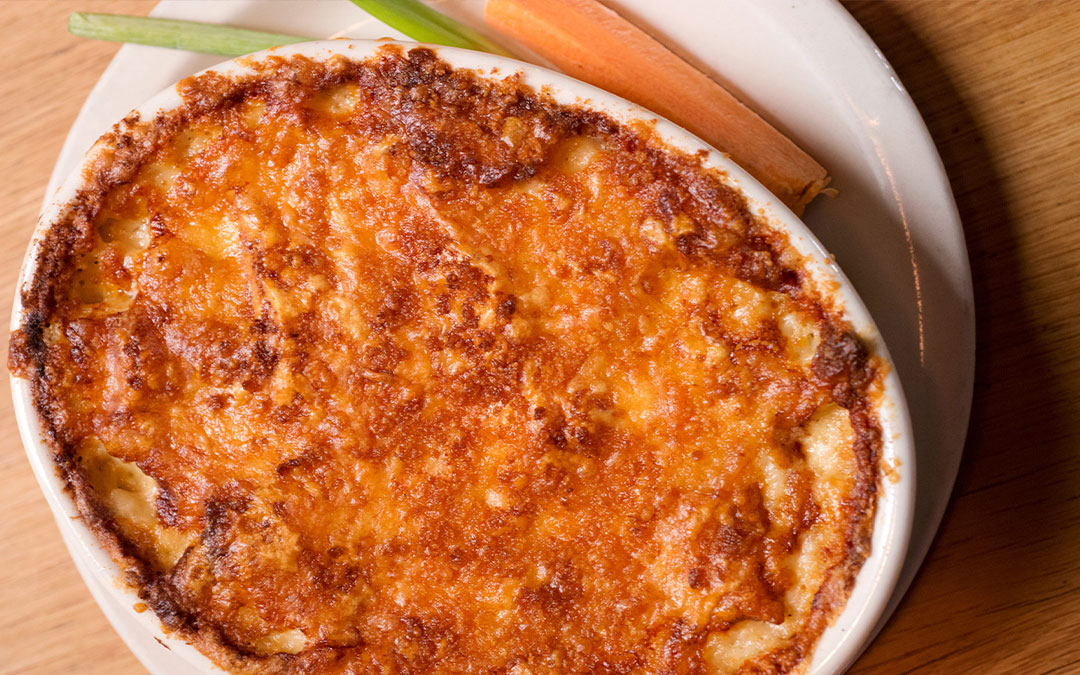 Editor’s note: I’m not a big fan of Macaroni and Cheese as a Thanksgiving side dish. It just doesn’t seem “fancy” enough for the occasion. But, many of you DO traditionally include mac & cheese so, why not take it up a notch?  I’ve made this myself and it’s a winner! cf

Boil the penne pasta until al dente– make sure not to overcook, since it’s going to bake more in the oven. Drain and set aside to cool. I mix the pasta up with just a little olive oil so it doesn’t stick together. (you’ll thank me)

Add the chopped onions, crushed garlic (you can use the stuff in a jar), bacon and butter to a pan and cook on medium heat until the onions are turning translucent.

Now add the flour a little at a time while constantly stirring, to make a roux. (a roux [it’s French!] is flour and fat cooked together used to thicken sauces.) Who  would have thought that good old-fashioned, down-home mac and cheese has origins in fine French Cuisine? Keep stirring until the roux is the color of peanut butter.

While the roux is cooking, add two cups milk and one cup of the cream to a separate pot with the nutmeg, salt and pepper, and heat on low to medium heat, stirring regularly, until warm.

When the roux is ready, add the warm milk/cream mixture to the pan and mix thoroughly. Stir until the mixture just starts to simmer and thickens up. Add the two cups of shredded parmesan a little at a time.

Let the roux/milk/cream/cheese mix cool. Since this mix and the pasta need to cool down, this is good to make ahead of time so it’s quicker to put together and throw in the oven just before dinner.

Now add the first half of the pasta/cheese mix in a baking dish. If possible, a porcelain dish that is approximately 8″ x 10″ x 3″ deep. Just use a baking dish that can go from oven to table. After the first layer is in, add the slices of extra-sharp white cheddar (or Pinconning) on top. Then layer the rest of the pasta/cheese mix on top, cover with shredded yellow cheddar (once again, the restaurant uses shredded white cheddar here), and finally a layer of panko crumbs on top.

The top layer should be a nice shade of brown, if not, a minute or two under the broiler should work. (Keep an eye on it. You wouldn’t want to screw it up at this point!)

Serves 4-8, depending on how hungry they are and how much they LOVE “your” mac and cheese!