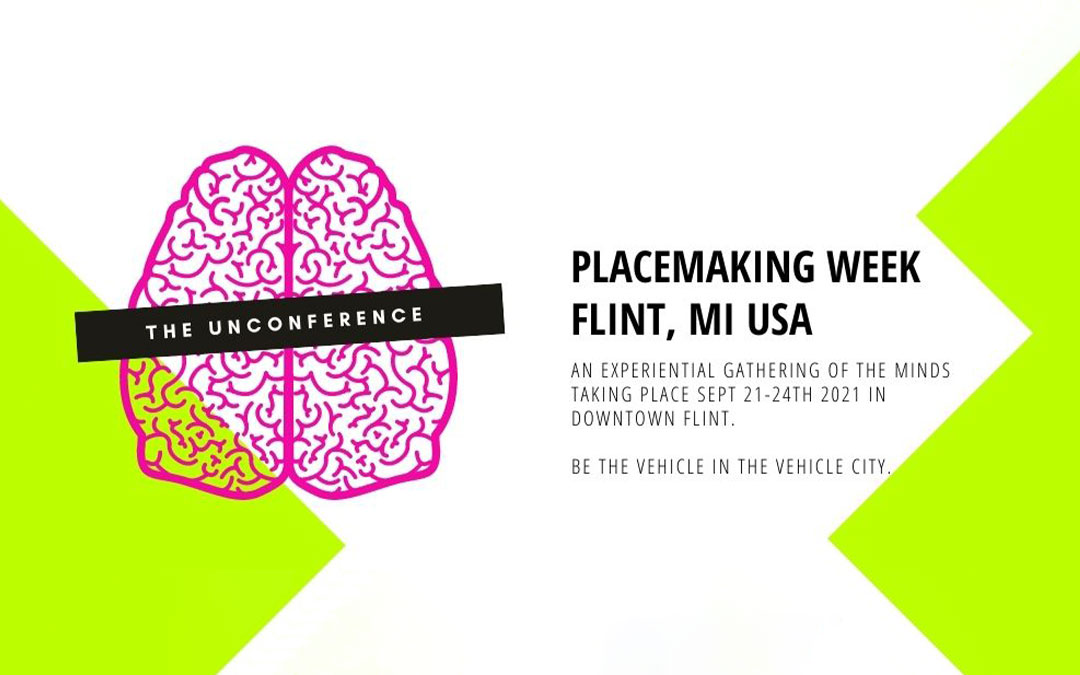 As noted in last month’s edition of FOCOV, the City of Flint hosted Placemaking US to the city, bringing placemakers from 25 states across the country to meet community leaders, explore issues and grow in their placemaking practice together.

The early Fall weather in Michigan could have been predicted necessitating some events indoors, but that did not hinder any of the attendees.

The first introduction to Flint was a Mural Walking Tour of Carriage Town and Downtown hosted by Director of Placemaking for What’s Up Downtown Flint, Kady Yellow.

Kady explained the differences of street art, graffiti and murals and showcased the stories behind some of Flint’s earliest murals, an outdoor art collection worth more than $1 million according to Kady’s own research.

The Orientation to Flint was moved indoors to hear about Flint’s history as the birthplace of the automobile industry, demographics that revealed the low-income and formal education achievements in Flint, and an introduction to the Flint Water crisis by local water entrepreneur Alex Love, Flint Neighborhood United’s Carma Lewis, The Porch Project’s Meghan Heyza and place advocate and urbanist Cade Surface.

Following Orientation, the groups divided into cohorts based on their expertise and interest and headed off to dinner at Cork on Saginaw. It was a lively venue for discourse and initiating warm connections, especially with the urging of Ttia Lee efor all to enjoy a Tequila shot and for Kady Yellow’s gracious offering of a champagne flute to all upon arrival. Groups sat by interests including: Downtown Management, Connecting Neighborhoods, Healthy Placemaking, Creative Placemaking, Makers of the New Economy, and Streets for People.

Placemaking Week officially kicked off  at the iconic birthplace of General Motors, Factory 1. Mayor Neeley welcomed the assemblage along with Place-

making Poet, Frankie McIntosh. Kady Yellow introduced us to her placemaking journey and showed the resident-lead work she has been supporting.

utilized the historic venue to talk about the relationship between cars and automobile infrastructure and livability, sociability and interconnectedness of our neighborhoods.

Moses Timlin, from the Genesee County Land Bank showed us the healthy placemaking he’d been a

part of in the Carriage Town neighborhood we were in and Leslie Mattie-Rich of Westwood Works in Cincinnati showed us how she built back up her own neighborhood with programming and ultimately redesigning their central square. Sherryl Muriente shared insights from her international career participating in innovative practices like archaeology of place and urban acupuncture.

The rain moved the afternoon session indoors next door to Factory 2. The Healthy Placemaking panel explored the expansive relationship between place and health, and the ways placemakers are building opportunities for places and people to be healthier from physical activity to mental  health, safety from violence and access to economic and education opportunity.

“The number one determinant of health is your zip code,” stated Hanna Love, a researcher at the Bass Center for Transformative Placemaking at the Brookings Institute.

Meghan Heyza of the Porch Project shared how she does participatory research with populations, not on them, but with them, by building long-time relationships with people whose health outcomes she is hoping to improve. Molly Baskin graduated from a crowdfunding placemaking program that helped her launch outdoor step exercise classes at Downtown Flint’s iconic Brush Park. She shared how her public-facing Curvy Girl Fitness classes expand the idea of what healthy looks like by showing-off many body types on their journey for health with an enticing collective energy.

Tony Vu  led the group into Makers and the New Economy session because his story straddled the fence between the two topics.

Tony has a kitchen stall at the  Farmers Market and a food trailer. With this lightweight infrastructure, he makes his permits and facilities and industry know-how available to up-and-coming food entrepreneurs.

The Connecting the Neighborhoods Bus Ride showcased what local neighborhood groups are involved in to improve quality of life issues. The ML King Peace Garden was first on the tour.

Another stop on the tour was Caniff Street where Meghan Heyza has spearheaded the repair and replacement of over a dozen porches through her Porch Project.

These are some of the highlights, but there was so, so much more.  Here are a few photos.  For the complete story of the week, please visit: 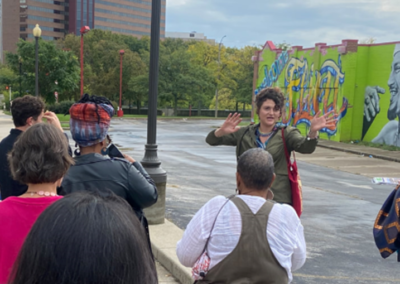 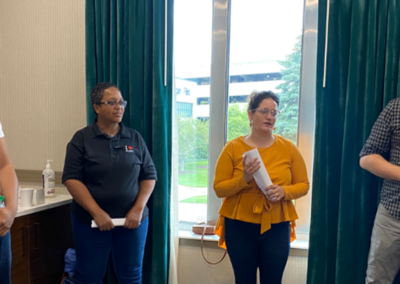 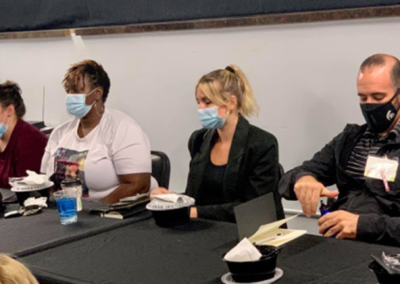 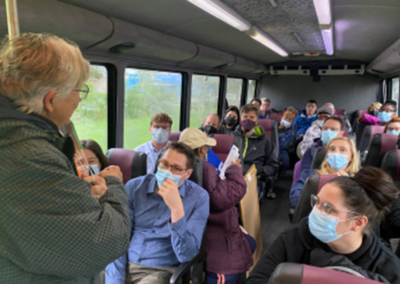 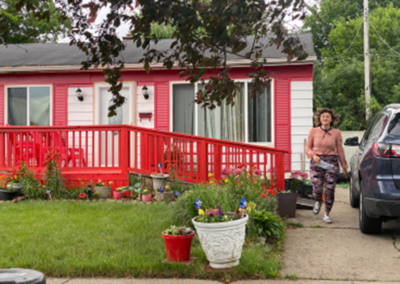 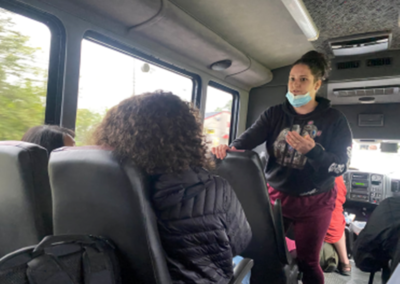 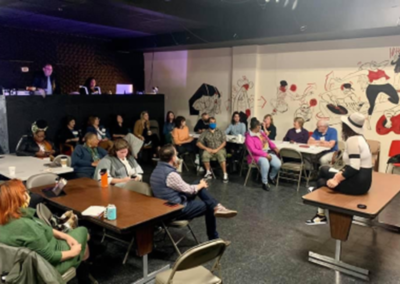 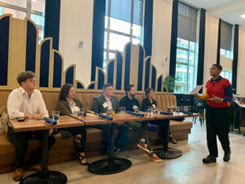 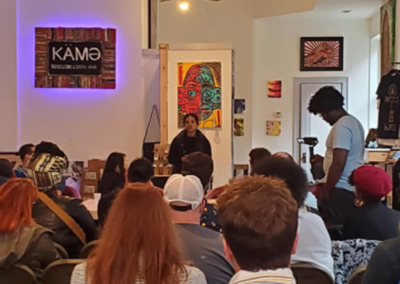 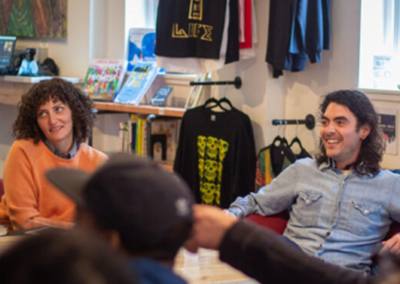 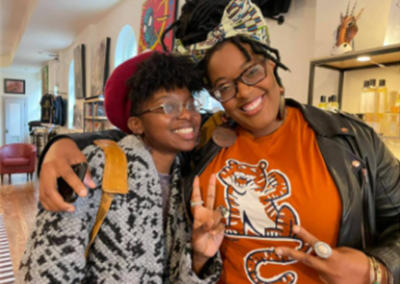 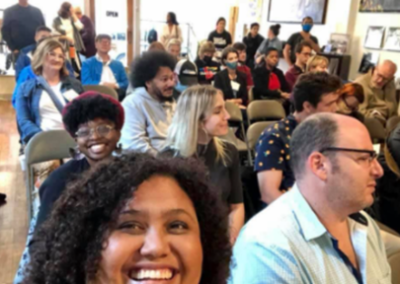 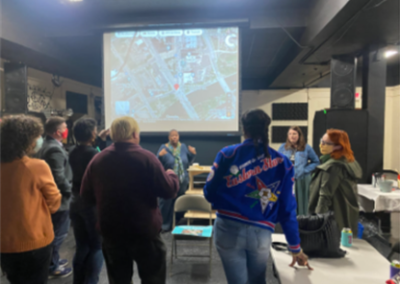 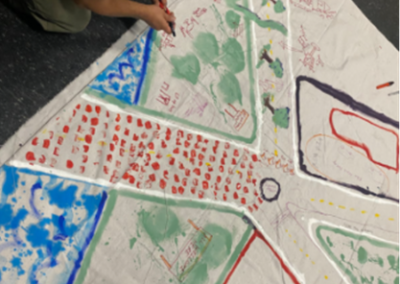 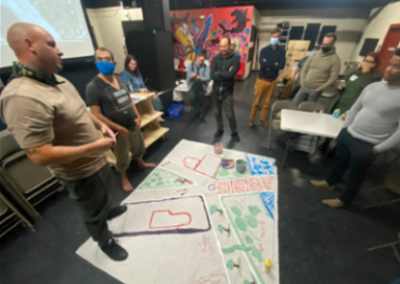 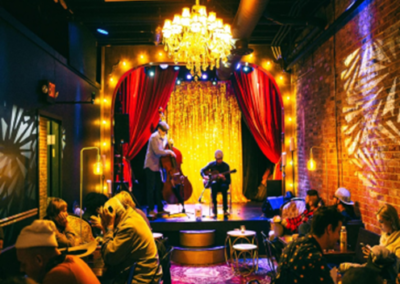 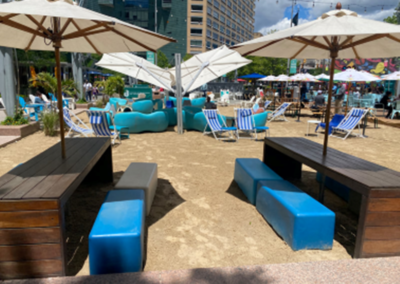 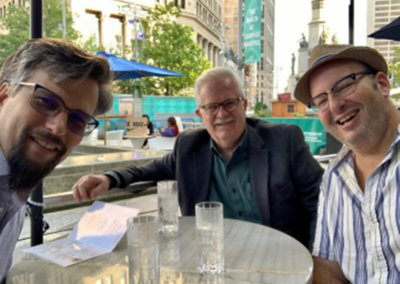