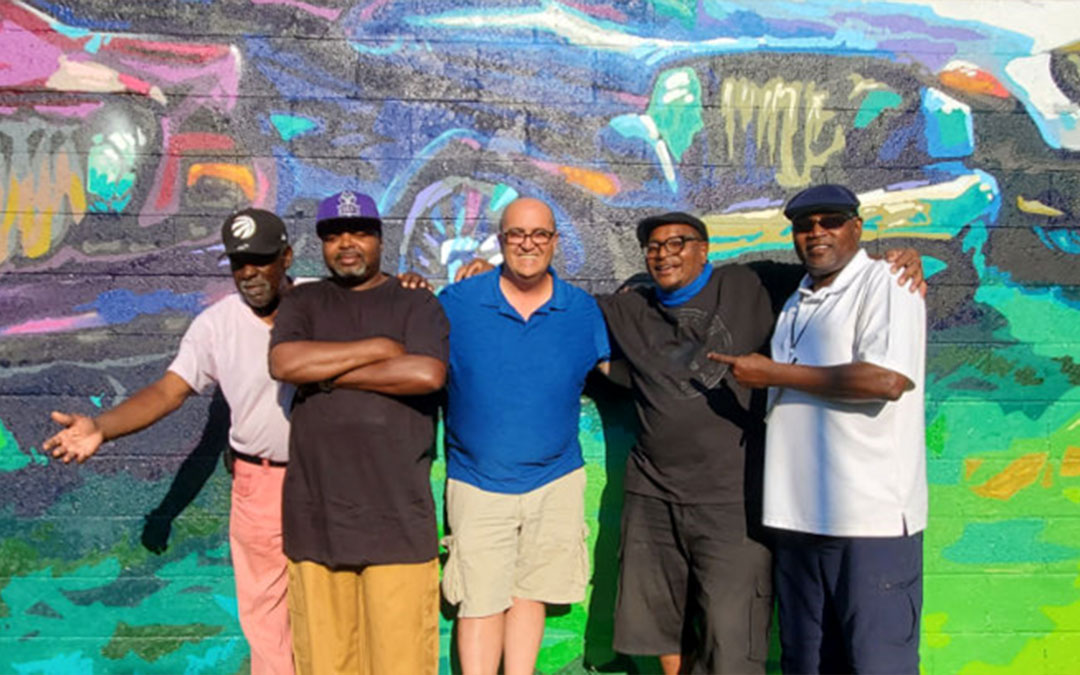 Normally you don’t think of art and nutrition intersecting, however, Joe Schipani,  Director of the Flint Public Art Project,  has found a way to be involved with both in the Flint community. Originally from the suburbs of Detroit, Joe has been a resident of Flint since 2006. When asked about his pathway to Flint he shared, “I have fallen in love with the place. I more or less fell in love with the people.”

Joe graduated from the University of Michigan-Flint with a Bachelor of Fine Arts degree in Theatre Design.  He went on to earn a Master of Public Administration (MPA) degree and has spent his time since 2013 working with the artist community in Flint to activate different vacant areas in our area and help the community reimagine what buildings in the city could be.

A great deal of the work that Joe accomplishes through the Flint Public Art Project is achieved through him finding the spaces for art projects, curating the artists, and even housing them at his house while they are in the community working on art projects. Many of the pieces have been very successful and have provided benefits to both Flint and the artist. An example of this success is a mural depicting Rev. Martin Luther King Jr. walking arm-in-arm with civil rights leaders and activists on the city’s north side.  It has gained national attention for the neighborhood, which subsequently received grants from Keep America Beautiful, as well as provided notoriety for the local artist, allowing him to expand his reach worldwide and create pieces in many countries.

Joe is also very passionate about the work he is doing with the Flint Leverage Points Project, where he has been working to assist with research studying the food system in Flint and trying to improve access to healthy food. Over the past 4 years, Joe has been a Project Assistant in this work, which has allowed him to dive deeper into food systems in Flint and learn more about how they work.

Some successes that Joe has seen over the past two years really came from a point of crisis that allowed Flint to shine during a worldwide pandemic. “During the water crisis in Flint, our community worked really hard to figure out how to come together and help each other out,” Joe explained.  “It was the lessons and processes that came out of that experience that helped our local community be able to move quickly when the pandemic came about to be able to get food to families and easily distribute resources.  We were seeing quantities at food pantries triple in just a few weeks, and I was so proud of the way our community was able to help, fast.”

Some of his work in the nutrition space has led Joe to work with the developing Flint & Genesee Food Policy Council and Crim Fitness Foundation, where work is just beginning to assist with increasing access to healthy food and cut down on food insecurity.

“We are really excited about the work that will be coming out of the Flint & Genesee Food Policy Council, and Joe’s involvement has been critical in providing insights into the challenges present and understanding how to provide real solutions,” shared Samantha Farah, Manager of Food Systems and Nutrition at the Crim Fitness Foundation.

Joe recognizes that there are many improvements that could be made, but one large goal he has for this work involves removing the stigma around food assistance.  “The process of food delivery needs to be improved. It needs to be made into more of a choice instead of here is what you get,” Joe also shared.

We are appreciative of the great work Joe does in our community in both the art and nutrition fields.  His connections to the work the Crim is passionate about run deep and also include work with the Flint Community Education Initiative led by the Crim Fitness Foundation, where the Flint Public Art Project has worked with Flint scholars to provide various art programs and help get our youth excited about creative studies

It is apparent that Joe loves helping people. When not serving the community, he enjoys playing with his puppy at home and writing.  He has co-authored a novel called “Haunted Flint” and is in the process of putting another book out next year.  He even helped produce a film called “Half-Dead Fred” that was inspired by another book he wrote, and he used the house he lives in as the film location.

Through Joe’s work, art and nutrition have collided, and our community is better off because of it.  The work he does with the Flint Public Art Project transforms the walls of the city into places that bring people together, while his efforts in nutrition bring people together and provide food and resources to families. We are appreciative of the great work Joe does and know that our community grew a little brighter when he decided to move here back in 2006.

“I believe that unarmed truth and unconditional love will have the final word in reality. That is why right, temporarily defeated, is stronger than evil triumphant.” – December 10, 1964
Martin Luther King, Jr., Nobel Prize Acceptance speech