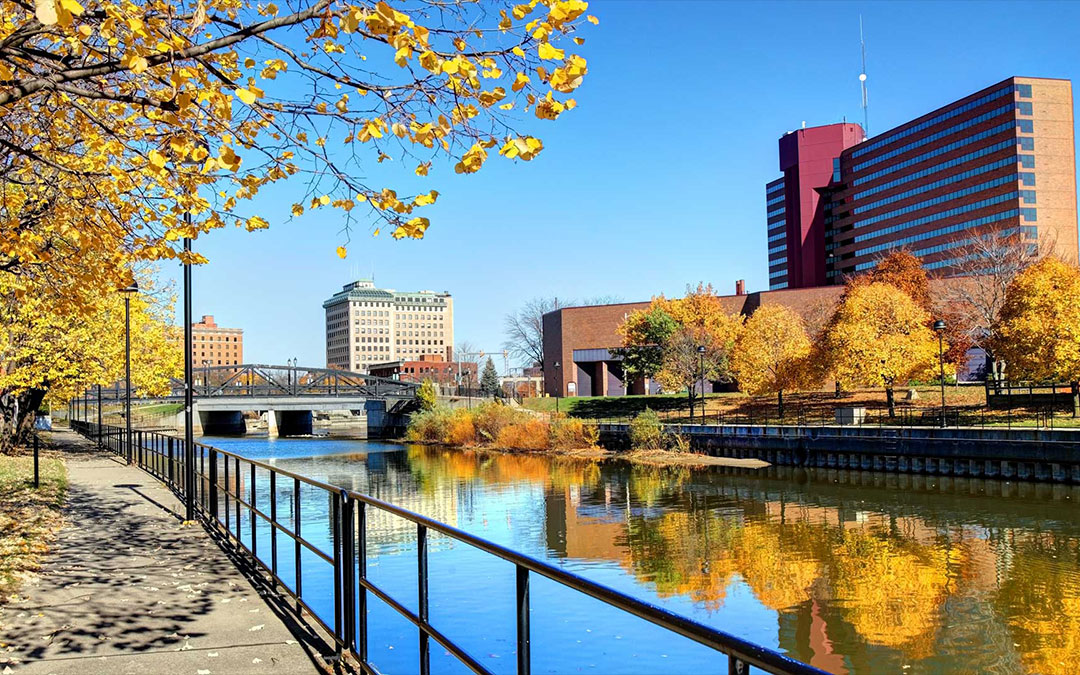 In Flint, what we build, how we build it, and where we build it, is still governed by a law adopted in 1974. This law, our zoning ordinance, governs not only whether a factory can be built near a neighborhood or whether a store can open on a block with homes, but it governs the smallest details of what our neighborhoods look like – how far back from the street a building must be, how tall a building can be, how many parking spaces a site is required to have, and more. For decades, Flint has been working with an outdated zoning code that reflects an era profoundly different from our own. So many of the things that make our neighborhoods great – small shops, walkable streets, a mixture of housing types – are entirely illegal in our current ordinance.

Starting in November of 2021, a group of Flint residents got together to form Flint Residents for Stronger Neighborhoods to advocate for better land use laws in our city, including adopting a new zoning code. Thankfully, this was not an effort that started fresh. In 2013, after engaging over 5,000 people at more than 300 community meetings, Flint adopted a new comprehensive Master Plan entitled Imagine Flint. This plan included a Land Use Plan to guide the city’s future development in a way that was democratic and reflective of the wishes and vision of Flint’s residents today, not in 1974. Our Planning Commission then spent 4 years working through dozens of additional meetings to make that land use vision into a brand new zoning ordinance. This ordinance addressed a host of resident concerns, including ensuring that all neighborhoods would see investment and that Flint residents across the community would have a chance to invest in their homes, businesses, and neighborhoods no matter where they lived. After adopting this ordinance unanimously in 2017, it has sat without final adoption by the City Council, the last step needed for it to become law in Flint.

Thankfully, the committed action of residents from across Flint has brought this issue to the forefront. Meeting each month, Flint Residents for Stronger Neighborhoods members have spoken at neighborhood meetings, hung flyers on doorsteps, and spoken out strongly in favor of the new zoning ordinance before City Council. Thanks to this effort and the positive, encouraging engagement of city councilmembers, the ordinance is closer than ever to adoption. In June, the code was voted out of the Legislative Committee and had a First Reading before the full City Council. This month, the Council will likely hold a vote on formally adopting the code, and it is more important than ever that Flint residents make their voices heard in support of this ordinance.

This new code could make it easier for us all to build the kinds of neighborhoods we want to see. More small shops that we can walk or bike to, new housing that is pedestrian friendly, investments in business districts in every ward and corner of this city. A process that makes it easier for Flint residents to invest in their own homes, businesses, and neighborhoods.

If you would like to learn more about the new zoning code, you can read more at ImagineFlint.com. You can also learn more about Flint Residents for Stronger Neighborhoods by visiting our Facebook page, just search for us by name. FRSN meets once a month, usually at St. Paul’s Episcopal Church in Downtown but with future meetings held across the city. We also post when important meetings and calls for action are coming up, especially at City Council.

This code has the chance to create the conditions for a more equitable Flint, a Flint that prioritizes welcoming new residents and supporting longtime residents alike, and a Flint that says that our land use laws will be guided by the input and vision of today’s residents. We can only do this work if we do it together, so please join us. Together we can build an inclusive, equitable Flint for all.